Betty McQuade , who came from a family of Scottish entertainers, started her career by winning a talent quest in Brisbane. For the next five years Betty Mc Quade performed at many Brisbane venues including Cloudland, various clubs and television shows. She also featured with Col Joye and Johnny O’Keefe at Festival Hall Brisbane.

Seeking further success Betty arrived in Melbourne in 1961 and, after developing substantial public support, was selected by Astor Records to vanguard their new policy of signing talented Australian artists.

On returning to Queensland in 1966 Betty McQuade featured at Brisbane and Gold Coast cabarets and night clubs. Betty’s repertoire expanded to include evergreens and ballads to compliment the rock-n-roll.

In 1983 Betty Mc Quade headlined the video Rockin’ at the Arcadia. Since then Betty has been a guest on numerous radio and television shows. Betty has toured the southern states of Australia with the Allstars and performed on Johnny Chester’s Rock-n-Roll Reunion at Crown Showroom in 2002.

Midnight Bus, recorded in 1961, has been released more than six times. This record is an Australian rock-n-roll classic and is sought after by collectors.

Betty Mc Quade was a consistently dynamic rock-n-roll performer and in 2007 toured with Bobby Rydell and the Allstars.

Following Betty's passing in 2011, a 22 track CD "Betty McQuade Collection" including all of her commercial releases, extremely rare television recordings and in-concert recordings has been released. Betty McQuade Collection is available from www.entertainmentassist.org with all revenue from the sale of the CD donated to Entertainment Assist, a charity which provides education, preventative assistance and support to Australian Entertainment Industry participants to reduce the negative effects of the risky and speculative nature of the industry. All donations are matched by the Pratt Foundation. 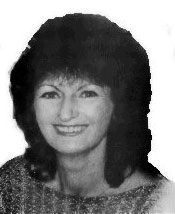 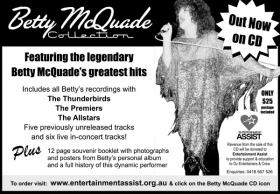 Listen to all her classic hits
in this ultimate collection!