The Gerry & the Pacemakers show is a presentation by a brilliant musical legend from the UK.

In Australia Gerry & the Pacemakers enjoyed six top ten hits and twelve top forty successes. They have proven to be major draw cards in venues throughout Australia and the rest of the world.

Gerry & the Pacemakers were signing to a Brian Epstein management contract. They were just the second group signed by Brian Epstein, immediately after the Beatles

Before their popularity spread worldwide Gerry & the Pacemakers were second to the Beatles in popularity in Liverpool and the UK. Hit records throughout the world followed quickly.

Gerry & the Pacemakers dominated the world music charts between 1963 and 1966. Their first three singles topped the charts – ‘How do you do it’, ‘I like it’ and ‘You’ll never walk alone’. This level of success was not even achieved by the Beatles.

More top ten hits followed – ‘I’m the One’, ‘Don’t let the sun catch you crying’, ‘Ferry cross the Mersey’, ‘I’ll be there’ and ‘Pretend’ to mention just a few.

The producer of these recordings was Sir George Martin, who also produced the Beatles recordings.

In Australia Gerry & the Pacemakers had six top ten records and twelve top forty hits including ‘How do you do it?’, ‘Ferry cross the Mersey’, ‘You’ll never walk alone’, ‘I like it’, ‘I’ll be there’, ‘Pretend’ and ‘Don’t let the sun catch you crying’

Gerry Marsden has been awarded an MBE by the Queen for his services to the entertainment industry.

During 2013 Gerry & the Pacemakers completed their Farewell Australian Tour. 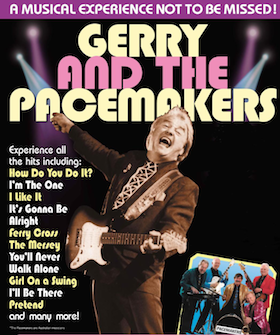